Operation Concrete, at its core, is a collaborative media project. It brings together the aesthetic and audio qualities of art and music around the power of the written word to provide the viewer, listener, reader, with a complete experience.

Operation Concrete is also, at its core, a fantastic experiment by good friend of mine, Rich Galbraith. I guess I’ve known Rich properly now since September last year when he was part of the team that ran the Nokia OpenLab event in Helsinki that I spoke at. Back then he was telling me about Concrete Operational, the book behind the project…

Germany Germany, a man who was free, a man who loved, now an instrument in their machine. They have turned him into the very thing he hates, what he and everyone he loved fought against, the world’s greatest celebrity, a tool in the subjugation of man.

But the memories of freedom and love remain, and he will fight and change the course of human history for the better, but at what end?

As humanity progresses and turns to face the eternal black of the universe, the questions of free will and fate, of love and peace, of the riddles of time itself will arise and Germany will be called upon. But is his will strong enough, his his mind ready to breach the void and provide us with salvation?

All of this aside, Rich is great guy and when he invited me to the launch party of the exhibition as a whole, I was over the moon. Alas, I will be out of the country that night and am unable to make it along.

However, I am in the country RIGHT NOW and fortunately enough, so is Rich. I caught up with him at lunchtime earlier today so he could tell me more – what I didn’t know, was that Rich had had the first of the limited set of project boxes made up with him…

It’s very nice… and I want one.

If you’re free this coming Thursday, November 26th. Get yourself along to Vibe Bar on Brick Lane in London’s Shoreditch from about 8pm onwards. Rich will be on hand to tell you all about the book, the bands and the art… 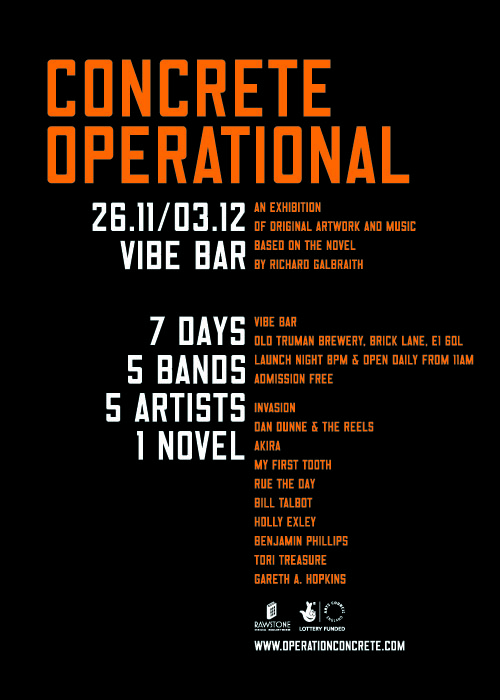 One thought on “Operation Concrete”