How do we fix them?

To find the solution, we first need to fully understand the problem.

2screen / dual-screen / second-screen — all are different names for the kind of integration that I’m referring to and it’s something I’ve been kicking around in my head ever since I went to my first 2screen event back in October 2010.

It was a big deal then and it’s a bigger deal now.

With the increase of iPad penetration and the continuous growth of the smartphone market, the notion of 2screening is becoming more and more commonplace. In fact, a recent Neilsen survey found that 80% of tablet and 78% of smartphone owners used their device while watching TV at least once during a 30 day period.

In the app-world, services such as ZeeBox and Sky Sports for iPad are doing very good things indeed. Both integrating news, stats and social media streams into your second screen; providing a suitable data-based accompaniment to your visual consumption.

However, I want to talk about television-based social media integration (not app-based).
This kind of stuff –

That’s how Sky One’s ‘Got to Dance‘ handles it and many other broadcasters follow suit. BBC One is getting in on the act too, here using a Twitter wall backstage for the UK edition of ‘The Voice‘.

What do these examples all have in common?

Fundamentally, they are all bringing (or at least attempting to bring) the conversation from the second screen, to the first. Which, correct me if I’m wrong, kind of defeats the object of the second screen.

Whether it’s reading out tweets during the credits of Celebrity Juice on ITV2 or talking about Facebook wall posts inbetween programmes on BBC3, broadcasters seem to be obsessed with sharing (read ‘owning’) viewer social media.

Recognising that conversation takes place away from their platform(s), TV + social media work best together when television directs its audience to the conversation medium, as opposed to smashing them in the face with it via another.

Sorority Girls, an E4 TV show, flashes up their hashtag both at the start and at the end of their show as well asÂ when going into ad breaks.

This is good! This is television saying –

‘Hey, perhaps some people are actually watchingÂ our shows when they’re on and, instead of going to the kettle during an ad break, they’re turning to Twitter!’

– and giving the audience your hashtag at this point is a very good idea. You own it, you guide it, you trackÂ it.

Ignoring The Voice for a second, the BBC actually do this quite well, both with Question Time and Have I Got News For You, for example: Little pointers like this give you, the viewer,Â the optionÂ of tracking (and joining) the back-channel. If you understand what it means, you join the conversation. Perfect.

I guess this is one big plea to broadcasters to just stopÂ reading out tweets and Facebook updates on the telly. Seriously, it just doesn’t work.

Finally, and returning to the opening image of this post, the new trailer for Prometheus aired recently during the first break of Homeland. Channel 4’s own announcer was employed also, asking viewers to tweet their reactions using the hashtag #areyouseeingthis.

So far, so good. Right? Right.

Except that, 20mins later (during the next ad break), those very tweets were displayed onscreen for all to see. 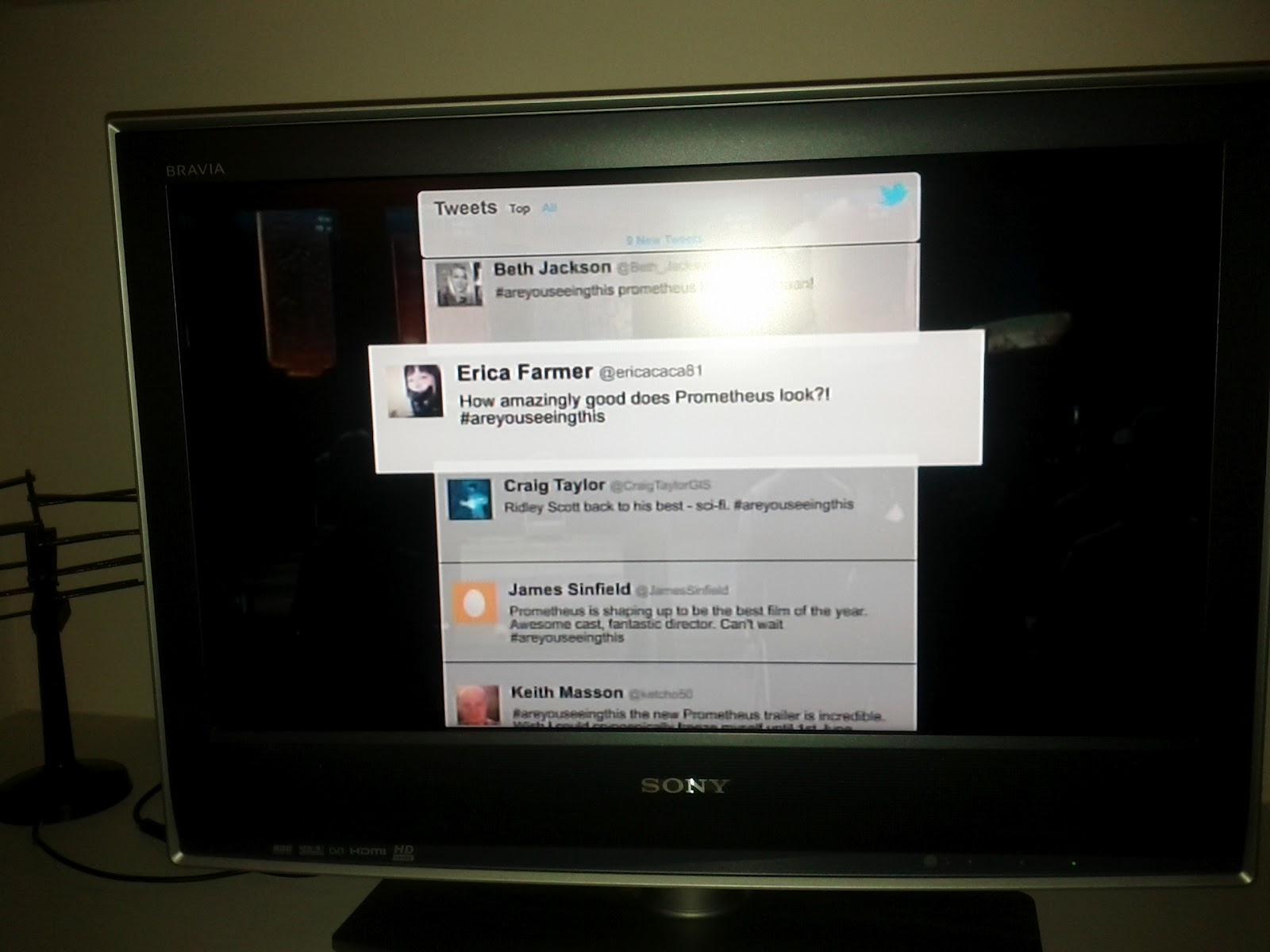 Reports state that this activity reached a potential audience of 15m users. (Note: POTENTIAL audience. That’s the number of every tweet with the hashtag, multiplied by their sum of their followers – ie: not a real number). And while this kind of exercise is a great advert for Twitter, it leaves existing fans and users feeling a bit… empty.

In closing, encouraging viewers to join an online conversation is one thing, replaying that conversation to them 20mins later is just a pain in the oculars.