1. Christchurch Dedication
The building above is what’s left of the Christchurch Normal School that was damaged during the earthquake in New Zealand earlier this year. The additional images, that have been placed in as a kind of optical illusion, are only temporary as the building itself is due for demolition any day now. However, the work itself has meaning.

Mike Hewson, the artist responsible, wanted to pay tribute to the talented people that once lived there and covered the building with these mixed-media installations that did just that.

Thanks to Marek for the source.

2. Olympic Heat
Now that the first part of the Olympics is coming to a close, once wonders how the athletes themselves might celebrate. Well, wonder no more, ESPN has the scoop and they lay it down perfectly –

Home to more than 10,000 athletes at the Summer Games and 2,700 at the Winter, the Olympic Village is one of the world’s most exclusive clubs. To join, prospective members need only have spectacular talent and — we long assumed — a chaste devotion to the most intense competition of their lives. But the image of a celibate Games began to flicker in ’92 when it was reported that the Games’ organizers had ordered in prophylactics like pizza. Then, at the 2000 Sydney Games, 70,000 condoms wasn’t enough, prompting a second order of 20,000 and a new standing order of 100,000 condoms per Olympics.

It’s quite a long article, but the whole thing is worth a look. It’s a great read.

This is Now pulls together real-time Instagram feeds and organises them by city. The usual suspects are covered and from Tokyo through to Sao Paolo, you can see exactly what’s going on where, right now.

And yes, of course I chose London – LOOK AT ALL THE OLYMPIC GOODNESS!

4. A man walks into a bank
Patrick Combs deposited a junk-mail cheque for $95,000 for a joke. The bank cashed it.
Free account set up required to read this article [on the FT] – but it’s worth it.

5. Thiel vs Schmidt
This isn’t new, but it’s something I’ve been thinking about a lot over the past few weeks ever since it happened.

Eric Schmidt is chairman at Google and Peter Thiel is ex-CEO and founder of Paypal. A couple of weeks ago they appeared alongside each other at the Fortune Brainstorm Tech in Aspen and their topic of debate was ‘The Future of Technology‘.

Apparently these events tend to be quite plain and a bit boring (I can’t remember where I read it) however, this time ’round, Thiel wasn’t pulling any punches. Choice quote:

Which basically translates as Thiel saying ‘Hey! Google! You suck! You’ve run out of ideas!’

Thing is, while Schmidt didn’t actually agree with him, the two of them did kind of agree when it came to barriers to innovation, namely: the US government.

PETER THIEL: I didn’t say that. I said, in fact, it’s the only innovation available, which is your point.

ERIC SCHMIDT: But, you’re saying we’ve been stagnant for 40 years because of bad government policy. If technology ‑‑

PETER THIEL: I didn’t say we’re stagnant. I said our policies could be improved.

And then… most tellingly, the moderator of the session asks Eric directly –

ADAM LASHINSKY:  You don’t want to address the cash horde that your company does not have the creativity to spend, to invest?

— The whole transcript is available to read online and I implore you to grab a cup of coffee and sit down and read it all. It’s brilliant. There’s just so much that’s alluded to… and it makes great pub-chat fodder too.

1. Stunning Ocean Waves
These are gorgeous and I could honestly sit and stare at them for hours. Dreams are made of this. Click through, gaze, hear the waves crash around you and… breathe.

2. The 3 White Lies Behind Instagram’s Lightning Speed
Instagram is a great service (I’ve blogged about it before) but this post, from Fast Company Design is a bloody fantastic read, a must-read in fact for anyone looking at mobile code and/or some good examples of smart UX programming.

There’s some great insights here (three, to be precise) and, for someone who has spent some time in mobile app start-ups, it’s excellent to see/read about some of the lateral thinking behind one of my favourite social networks.

3. Conversations with my 12yr old self
Best bit of UGC I’ve seen on the internet this week. Bar none.

Yes, it’s gone an annoying ad on the front. But hey, that’s what happens when stuff goes big. Just watch it, and be amazed.

4. Vodafone + BT Openzone access
If you have an iPad with Vodafone, apparently you get free access to a wealth BT Openzone WiFi hotspots all over the country.

The funny things, not many seem to be able to get it to work. Including me. This is a guest post over for Mobile Industry Review, go check it out.

5. Batman on a Pizza Hut
Exactly what it says on the tin. And I love it. 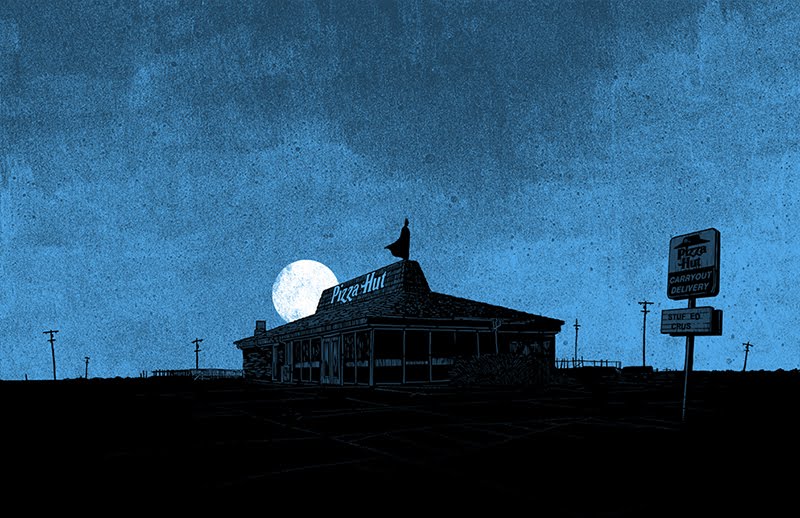 Bonuses this week; Five things on Friday is on a Thursday in Qatar, thanks to my friend Tarek; additionally, this digital hipster has inspired others too; and – when things move to the next stage – this poster is going on every single wall I can find.

I started writing this post last weekend, before the big Facebook sale was announced, as I wanted to talk about – in light of the recent Android-owners backlash – I use (and enjoy) Instagram. It’s funny now though how that very same backlash has not only continued but also now includes all things Facebook. Incredible. C’est la vie.

I love Instagram. There, I said it.
I also don’t own an iPhone.

Anyone who’s been reading this blog for any amount of time knows that I am a Nokia fan. My current phone du jour is the Nokia Lumia 800 and before I now I have waxed lyrical about its predecessors the N8 and the N86. Similarly, regular readers will also know that I am an iPad-owner also. Of that too, I am also a fan.

I am a social media junkie; If something is new and shiny, I take a(n educated and measured) interest and, in all honesty, the lure of Instagram was too much.

The next logical step? Install Instagram onto the iPad. While there isn’t an official Instagram iPad app, the iPhone version doubles up just fine. Problem solved, right? Well, yes but that’s not enough. I own an iPad 2 y’see and, while it does have an onboard camera, you may as well give a packet of crayons to a pack of blind monkeys for all the use it’ll do you. A decent image it produces, not.

The great thing about Nokia devices however, is that the top end bad boys tend to come packing high-end mobile camera technology. Which is great, and as 99% of the images I snap with my Lumia end up on my Flickr account – all I need is a method of getting those images into Instagram. Yes, it’s a lengthy process and yes it’s not exactly ideal either but like I said, I like the network and I like the people I follow there. I installed Instagram onto my Nexus S a couple of days ago and I’ve hardly used it. I prefer the iPad experience. Plus, my pictures are infinitely better.

Since the Android release last week it’s almost too funny how much the elitist iPhone-owners have spat back at the network [EDIT: even more so now after the sale]. Apparently some slighted iPhone-Instagrammers are even flocking to new services to escape the influx of ‘tasteless’ Android-ers. Hilarious.

I’ve enjoyed being a part of the Instagram community and have never uploaded an iPhone-created picture, ever. That makes me happy inside and that’s how I use (and why I love) Instagram.

PS. As I said earlier this week, post-sale, Instagram will be fine –

@DominicTravers I was thinking about that this morning, of the 30m+ users that Instagram has, they can’t *all* be Hipsters… it’ll be fine.

I had a post scheduled for later on this week talking about my recent love affair with all things Instagram (even though I don’t actually own an iPhone) however, some news is breaking right now that kinda needs covering.

All you guys tweeting about how sad it is that the instagram guys sold out: shut your face. Do you know how much $1 billion is?

To start us off, here are some numbers* to get your head around taken from the mere 18mths that Instagram has been in existence:

That’s a lotta love for an app that is solely mobile-based. But why is that important to Facebook? Think about it – Facebook is about the data. As the saying goes: if you’re not paying for the product, you are the product – and Instagram just sold a whole ton of data about its users. Not personal data, or contact data but image data and sharing data.

What people snap, what filters they apply when they’ve snapped and where & how they share that snap is all important data for a social network that builds itself around social objects and the relationships that people form around them.

While this kind of purchase is new ground for Facebook, it’s refreshing to see that it has every intention of keeping the service independent and multi-platform friendly. Mark Zuckerberg has already talked about lending Instagram Facebook’s strong engineering team and infrastructure – something that they’ll need when it comes to the building for scale. That sounds like someone who only has the app’s best interests at heart, certainly.

And while a billion dollars is a lot of money, Facebook has just bought itself its own standalone photo-sharing app, with a built-in base of happy users while at the same time cancelling out a potential competitor in the lucrative social networking space. Good things will come of this acquisition, Yahoo + Flickr this ain’t.

It’s important to be clear that Instagram is not going away. We’ll be working with Facebook to evolve Instagram and build the network. We’ll continue to add new features to the product and find new ways to create a better mobile photos experience.

Remember, the future is mobile and Instagram have proven that a mobile-only social network is not only worthwhile but 100% achievable to boot.

Best of luck guys (all 13 of you); your fans, users, industry and investors will be watching.

UPDATE – Other posts of note: