If youÂ SUBSCRIBEÂ to the Five things on Friday newsletter, you areÂ 100%guaranteedÂ to getÂ MORE STUFFÂ than reading it here on whatleydude.com

Christ, what a week. This is a long one, gang. Settle in or skip it. It’s up to you. But if any of what’s happened this week has impactedÂ you, then sit the hell down and read on.

“The number of my friends writing ‘Me too’ statuses is horrifying. And I feel sickeningly aware of my privilege.

I stand with you. And will do better/more to help/support you in future.

I don’t know what else to say. My voice doesn’t matter. Yours does. Make it loud, make it clear. This can happen no more.

Some friends, that night, got angry at me (for not knowing). Others, later, got angry because they considered it to be virtue signalling or the equivalent thereof.

The former I could only lay myÂ ignorance bare and say sorry – over and over and over. A number of friends contacted me and reeled off, one after the other, the awful things that had been happening to them since they’d turned 14. And I had no idea. I don’t know what I’m more disgusted by: the fact that it happened or the fact that it goes so unnoticed. I feel ill even writing that. I’ve cried a lot this week, learning the harrowing things some of my friends have been through. Just awful.

A very dear friend of mine quite rightly called me out and asked what exactly I was planning on going toÂ doÂ better.

My response is repeated here (with minor edits for swears + context):

[This is how I will] be better:

1. Keeping my privilege in check by keeping my eyes and ears openÂ at all timesÂ for when the sh*t that I’ve been blind to takes place.

2. Reading, and re-reading, listsÂ such as thisÂ (best thing I’m going to link to in this entire newsletter right there so you may as well all click it right now) – on how to self-improve.

4. Keeping an eye on howÂ IÂ treat the female company I keep.

5. Making it clear to the female company that I keep that if things are not going well, if this ‘normalised’ BS they’ve had to put up withÂ their whole livesÂ is happening and they want to tell someone, they can tell me.Â

So why the re-post here?

To those around you.

Pay attention. I haven’t been – and as much as my feelings don’t really matter when it comes to this – I feel completely foolish.

There are two more things to add.

1. There’s no way I’ve gone through life without being a casual/passive participant in this. I am sorry. I will be better.

2. Being called out by one of my best friends for behaviour past is as humbling as it is clarifying. Again, I will be better.

Will you be better?

Right, shall we crack on with the damn THINGS? There may be a ton of bonuses this week… YOU HAVE BEEN WARNED.

THOR: RAGNAROK drops this weekend and, as is MARVEL’SÂ wont, it’s time for it to start talking about the next big one to hit.

And that, my friends, is BLACK PANTHER.

LOOK UPON ITS GLORIOUS TRAILER IN WONDERMENT AND AWE. 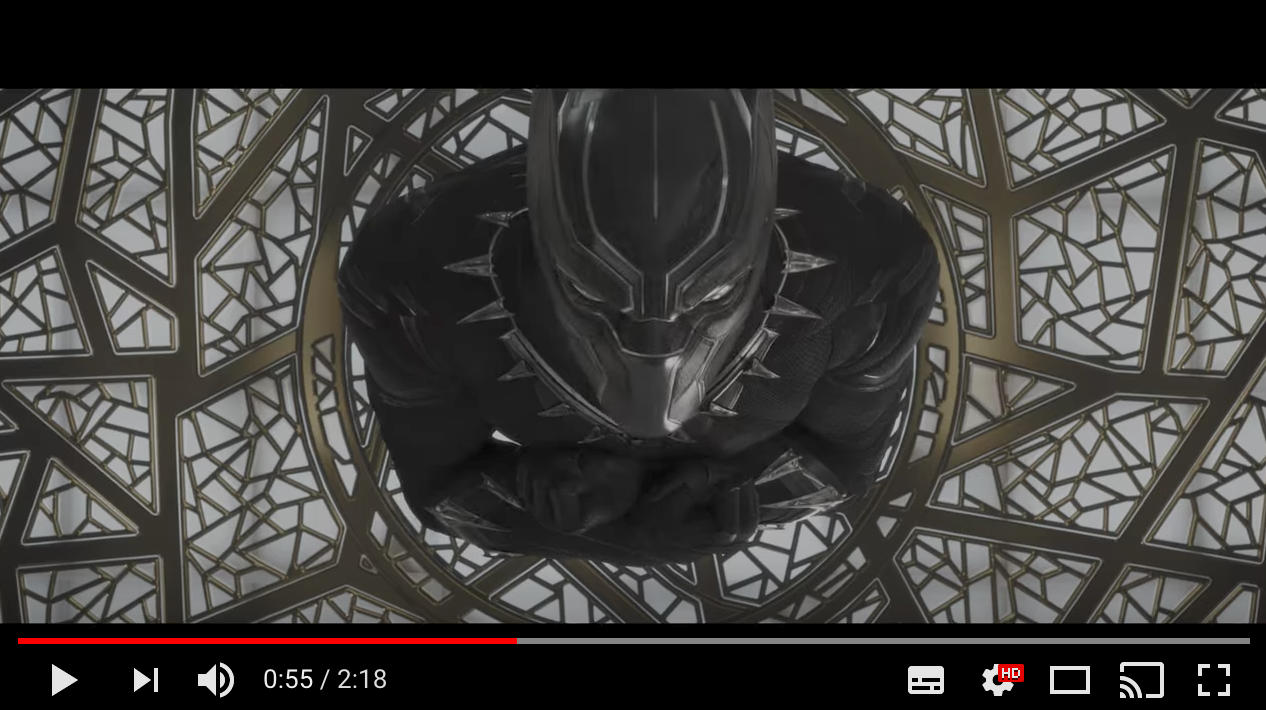 THE BLACK MARVEL LOGO AT THE START.

I am so here for this.

Bring it on, BLACK PANTHER.

PS. In other film news: yours truly finally got around to seeing BLADE RUNNER 2049 last weekend (while in Stockholm -Â at the IMAX, obvs) and IT WAS STUNNING. Visually and aurally sumptuous with a deft hand in slow-burn story-telling by Mr D. Villeneuve. If you’re yet to see it, seek it out LOUD and BIG.

PPS. Here’s a piece aboutÂ designing the technology of BR20149.

PPS. Counter-point – ‘Blade Runner 2049 is a misogynistic mess’Â (I’m reading this as I type – I may come back and edit some of the above).

2. BURGER KING HAS NO CHILL 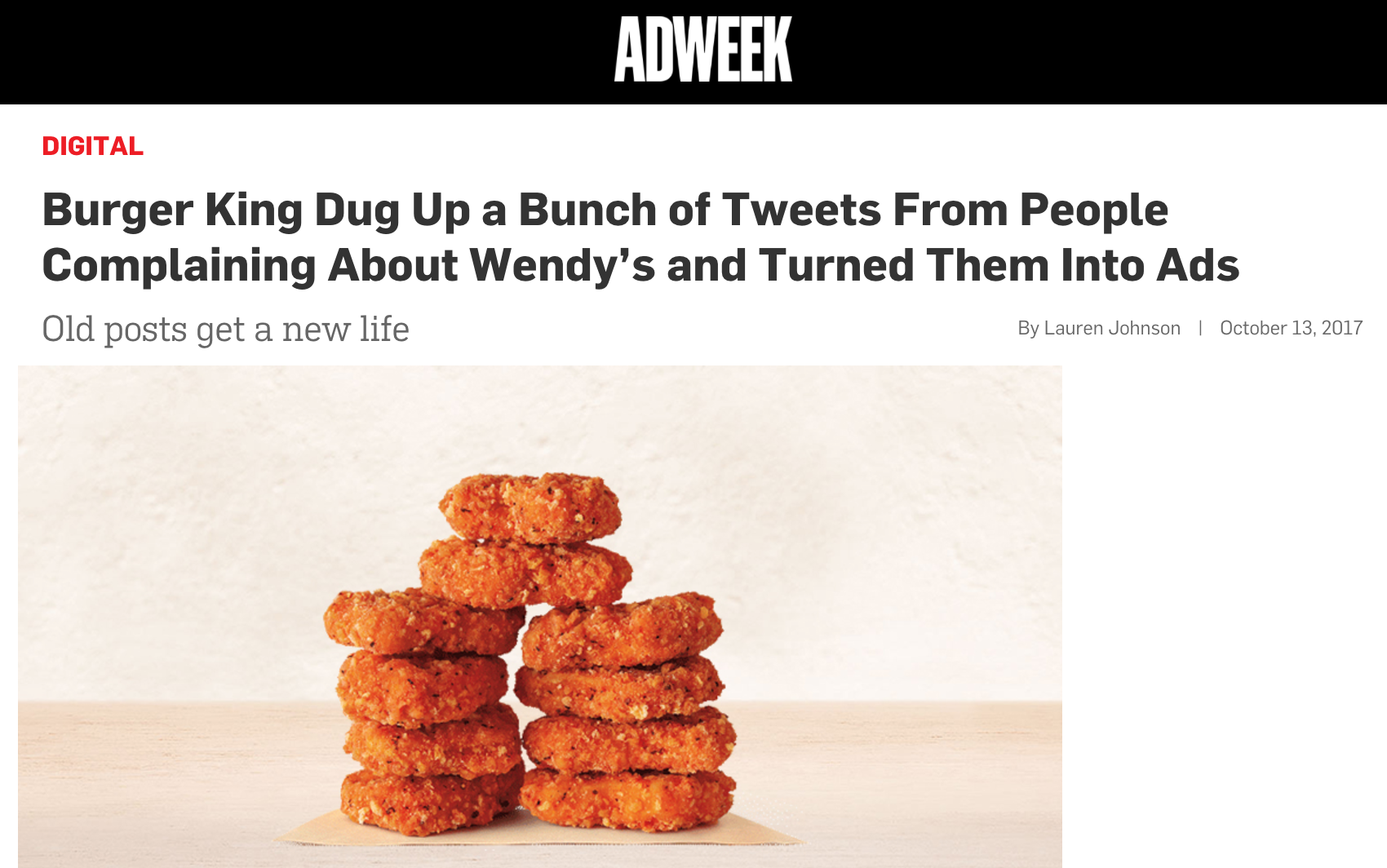 In March, Wendyâ€™s announced that it was removing its popular spicy chicken nuggets from its menu and fans began venting on social media and evenÂ set up a Change.org petitionÂ asking Wendyâ€™s to reconsider its decision.

Now, Burger King has launched its own version of the item and itâ€™s throwing some shade at Wendyâ€™s via social media. The burger chain evidently trolled through tweets from people complaining about not being able to get their hands on nuggets and is running promoted tweets against them so that months-old tweets populate in newsfeeds.”
——-

They actually did it too! 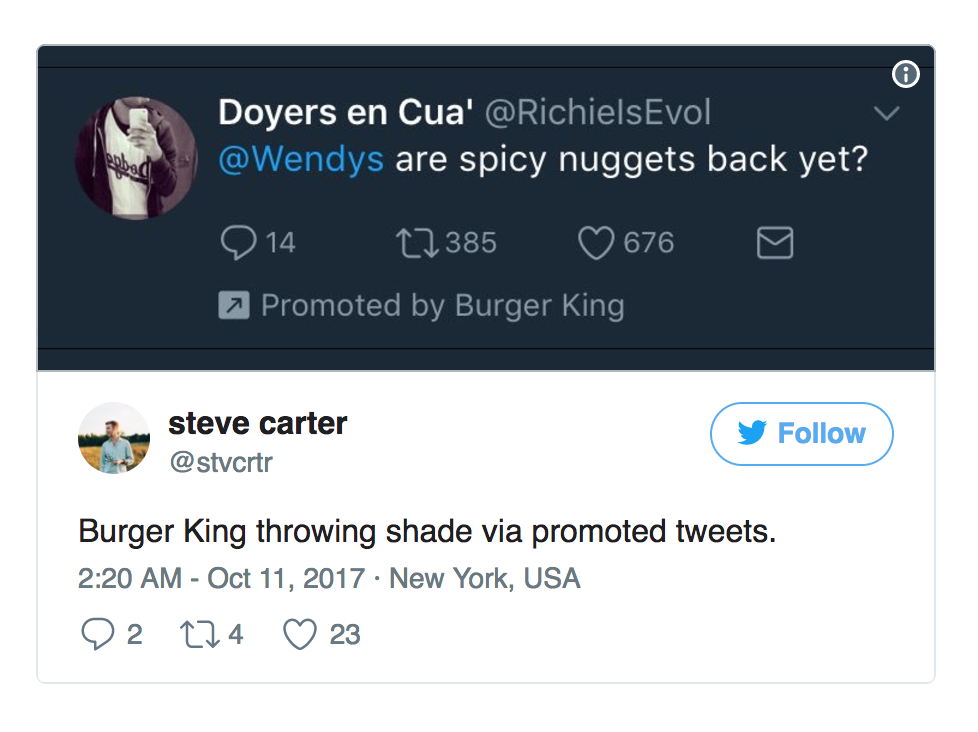 PS. The other fast-food-related thing doing the rounds today is the fact that the official KFC Twitter account, ‘@KFC’, follows only 11 people. If you’ve seen this already then you don’t need to click. If you haven’t, you’re allowed five seconds of nodding andÂ respecting, then you must return to this newsletter. Ready?Â GO.

If the above two words mean anything to you then this next section is not going to be fun.

It started, like a couple of other things sprinkled throughout this newsletter, with a tweet. To save time, I’mma combine the original and the quote reply into one image that’ll show you what you’re supposed to be looking at (image linked to original too): 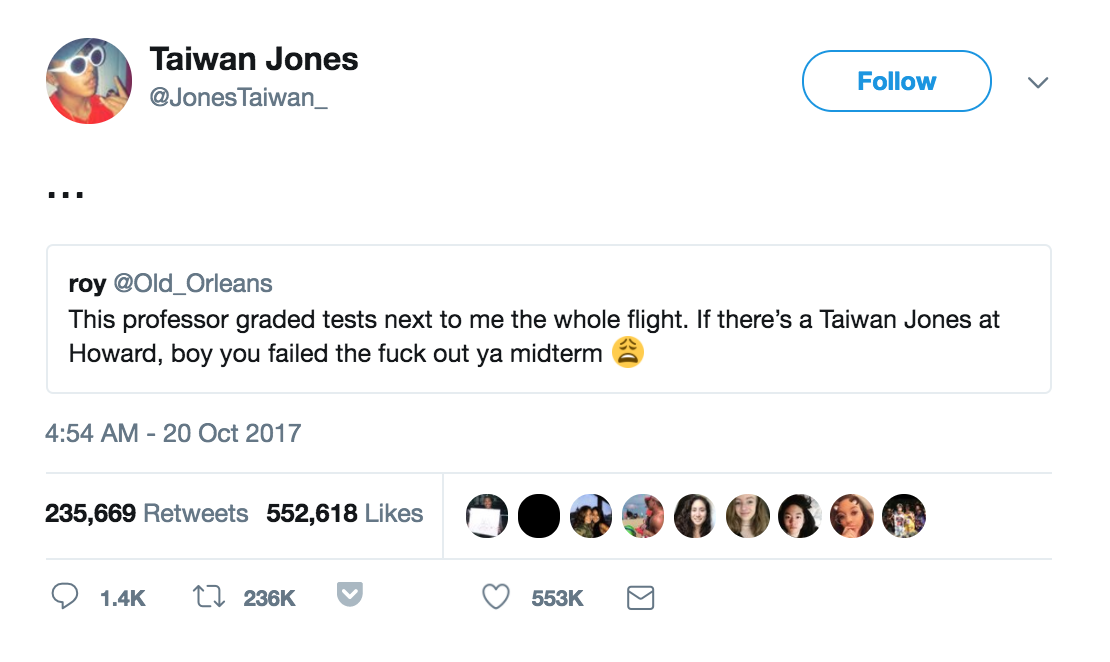 Right? I mean you look at that and be like ‘WOOOOAAAAH! DUDE!!!’ – well, you would if you were a teenage mutant ninja turtle but you get the point.

Alas, I must at this point invokeÂ The Washington Post:

“We regret to inform you that this delightful anecdote about the power of social media is not what it seems. Many key parts of the tale do not add up.Â Please keep reading as we slowly and meticulously destroy the joy this story may have first brought to you when you thought it was totally real. Itâ€™s what we do.”

a) Amazing.
b) Go and readÂ the whole pieceÂ and see exactly how (and potentially why) this whole thing is just one big MADE UP story.

When I first read the headline of the piece I’m about quote from (above) I remember thinking ‘Yeah, that’s totally right – they don’t’. I clicked through expecting verification on my own experiences – and I got them. But not in the way I expected.

First off, the piece.

It writes about the inherent dangers that exist within the ‘People you may know’ feature that you may occasionally see in your newsfeed. The worrying part is, thanks to the levels of access the Facebook app has to the various different parts of your smartphone, it can connect and reveal people in various jobs/positions/walks of life that they had hitherto preferred to have kept to themselves.

It is worth a look for that – as well as the total fumble that Facebook multiple and varied responses amounted to.Â Go read it.

On a personal note, I’ve experienced the ‘Facebook no nothing’ phenomena at least twice over the past few years.

The first instance was, while in a meeting with Facebook, I brought up the newsfeed algorithm (back then it was simply known as ‘Edgerank’).

‘No such thing’Â – they said.
‘Um, what?’
‘There isÂ nothingÂ atÂ Facebook by that name’
‘Yes there is’
‘No, we canÂ assureÂ you. Edgerank is not a thing thatÂ exists atÂ Facebook’
‘I’m sorry but you’re wrong. I’ve read about it’
‘You can’t believe everything you read in the press’

The condescending tone of that last part made me a touch apoplectic.

Me, to my boss:Â ‘Would you mind if I went and fetched my laptop real quick? Thanks’

Two minutes later I pulled upÂ THE ACTUAL PRESENTATIONÂ BY FACEBOOK ITSELF AND ITS OWN F8 CONFERENCE WHERE IT SAID ‘LOOK AT OUR NEWSFEED ALGORITHM, IT IS CALLED EDGERANK’ and they had nothing to say. Literally, nothing.

‘Well, we can’t talk about that’

The other occasion that springs to mind is a more recent one.

‘Hi [name of person], would you happen to have any documents that can explain the best ways to get the most out of your LIVE products?’
‘Oh no, sorry. We don’t have anything like that’
‘I’m sorry – what?’
‘We don’t have anything on LIVE right now.’
‘You mean, the thing you’re pushing on every single piece of media going – you don’t have ANYTHING available to help brands or agencies with creating content for it?’
‘No, sorry’

So yeah, next time one of your colleagues says to you ‘Hey, can we speak to someone at Facebook about [campaign idea X]’ – it might be quicker to Google it.

5. THIS WEEK IN ‘THE INDUSTRY’

I’ll try and keep this brief.

This week, pal and peer, Caitlin Ryan, said [the equivalent of] ‘What the hell is this?’ and sharedÂ this linkÂ to the ‘Private View’ in Campaign Mag. Campaign, for those of you that don’t know, is a well-regarded trade publication that covers brands, agencies, and the work they create. By ‘the work’ I mean ‘advertising’ but we’re in advertising so we all call it ‘the work’. I digress.

The crunchy point was this bit: 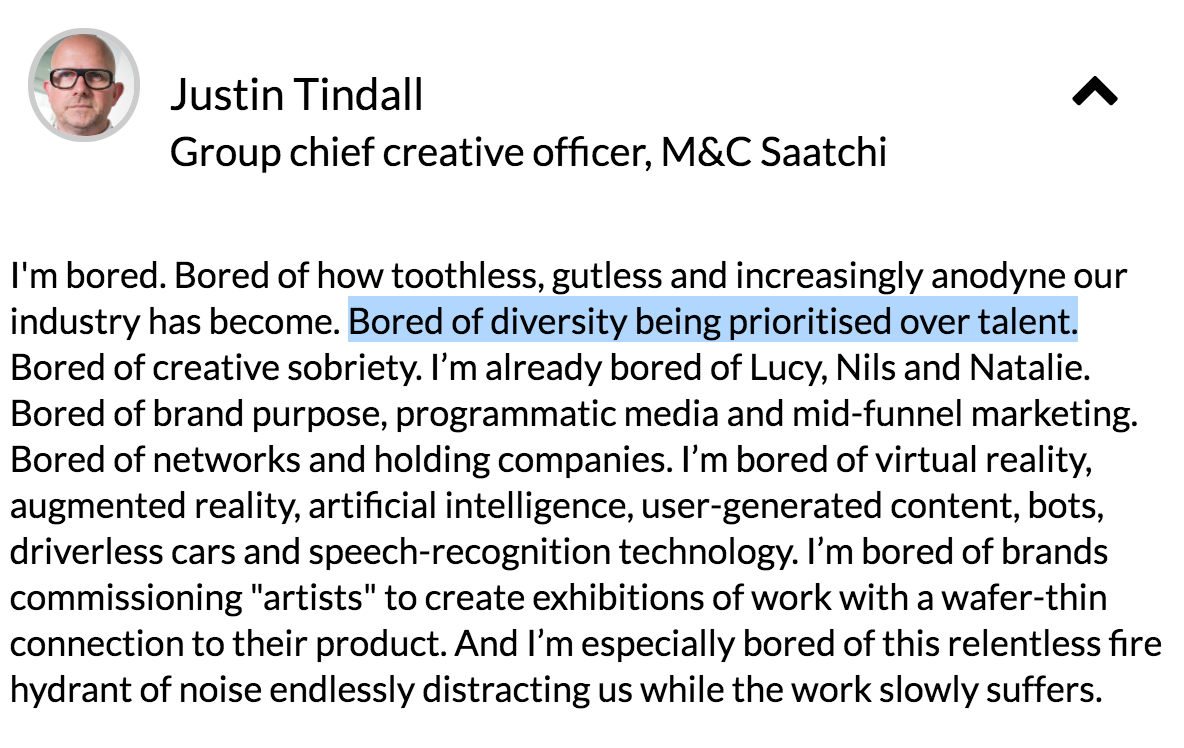 And you think, if I worked for this cretin – and I am identified as being ‘diverse’ then is he bored of me? Am I just a box-ticking exercise?

I asked the question: 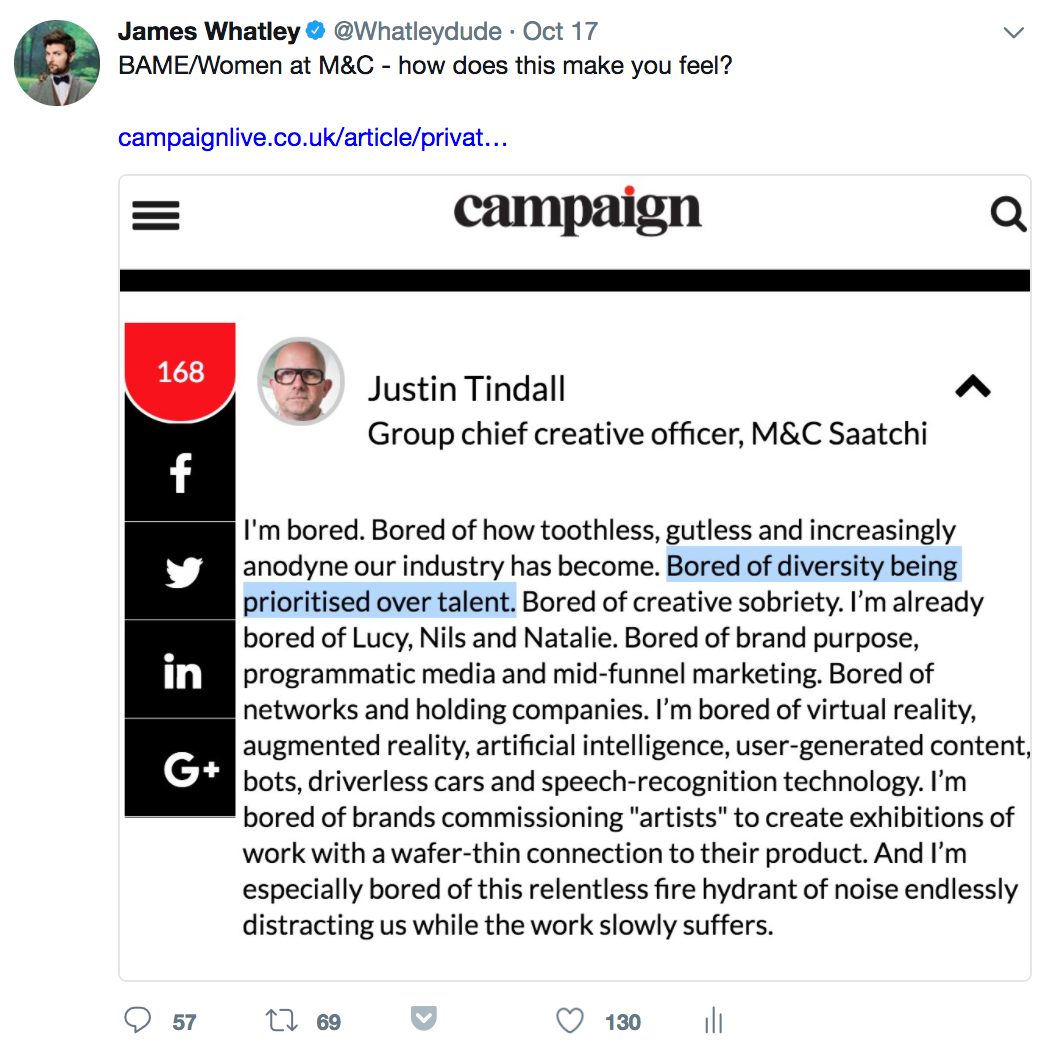 And then things went a bit nuts.

A few things here to cover off. A lot of the above is behind a paywall. Right click, open in an incognito tab, and you’re on way. Shh.

Next, the whole non-apology thing – basically, if you’ve read it you’ll know what I’m talking about when I say thatÂ anyoneÂ starting any kind of apology with ‘I’m sorry for the unintended offence caused’ isÂ notÂ apologising. They’re blaming THE AUDIENCE for reacting the wrong way, and not owning the general crapness of the words/deeds that caused it. Poor form.

Last thing, the one REALLY REALLY GOOD THING that’s come out of this is being able to witness the sheer strength and outpouring of vocal support in the industry for the importance of diversity. It gives me hope that the dinosaurs are indeed dying out and the industry I want to work in will one day be the industry I do work in.

Related reading (trust me – it is ALL related):

PS. As I wrote in one of the pieces above, Ogilvy UK is a fantastically diverse company to work for. It isn’t perfect but it will never be bored of trying to be better. Feeling uninspired?Â Come and work for us.

I broke two Chrome windows with the amount of bonus STUFF this week. So, y’know, sorry not sorry.

DIVE IN.
THE WATER IS LOVELY.
DON’T LOSE SO MANY HOURS.
LIKE I DID.
FOR YOU.

And that is that, my friends.

Hello to all the new subscribers – thanks for coming (hopefully you’ll stick around). And if you enjoyed this week’s edition you can do one of two things:

1. Hit reply and give me your validation.
2. Hit forward and share with a friend.

Until next time, fam.