Things of note for the week ending Saturday, August 5th, 2017.

If you SUBSCRIBE to the Five things on Friday newsletter, you are 100%guaranteed to get MORE STUFF than reading it here on whatleydude.com â€“ just sayin.

This is the last Five things on Friday for August. The next edition will come on or around September 1st.

Until then, enjoy the things!

LOOK AT THE NEW(ISH) POSTER. 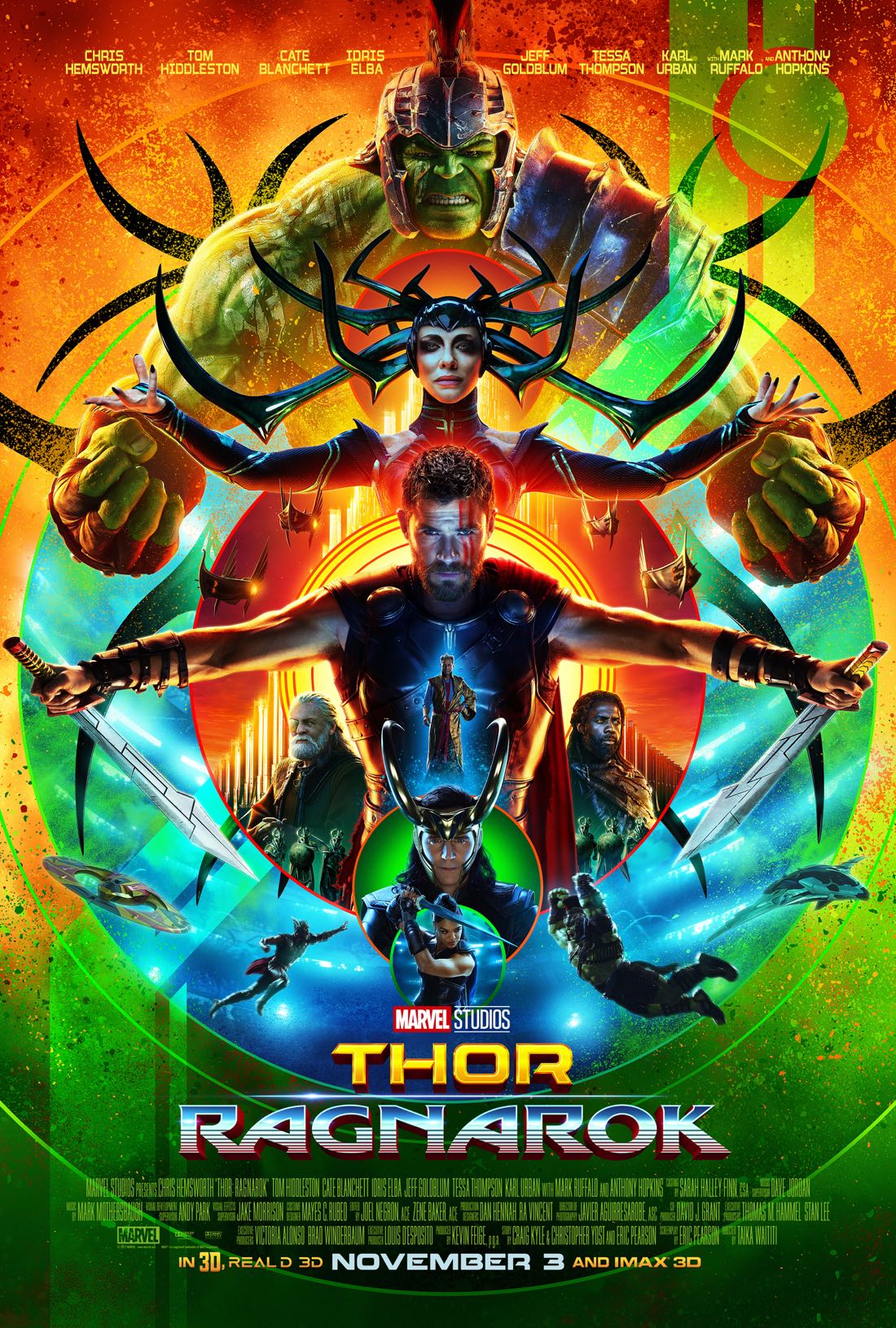 YES. THAT WAS A MARVEL PUN.

ALSO. THERE IS A NEW TRAILER.

IT IS AMAZING.Â GO WATCH IT. NOW. I’LL WAIT.

OK… I’ll rein it in with the block caps now. Sorry (not sorry). It’s just an AMAZING TRAILER.

Taika Waikiti is a genius and I can’t wait to see what he’s done with this.

If you disagree with that, btw, then you clearly haven’t seenÂ WHAT WE DO IN THE SHADOWSÂ (something you should consider rectifying this weekend).

Actually, while we’re talking trailers, you should watchÂ the one for STRANGER THINGS 2Â too. It looks ACE. YASSSSSS.

IMPORTANT SIDENOTE: I MAY HAVE WRITTEN THE ABOVE ‘THING’ TWO WEEKS AGO AHEAD OF THE EDITION THAT DIDN’T ARRIVE LAST WEEK BUT THAT’S OK BECAUSE IT’S THOR AND THOR IS GREAT AND TAIKI WAIKITI IS BETTER AND NONE OF YOU CARE THAT MUCH, RIGHT? RIGHT.Â

No, not another review ofÂ THAT movie. I mean, bonafide emoji-as-gargoyle usage. 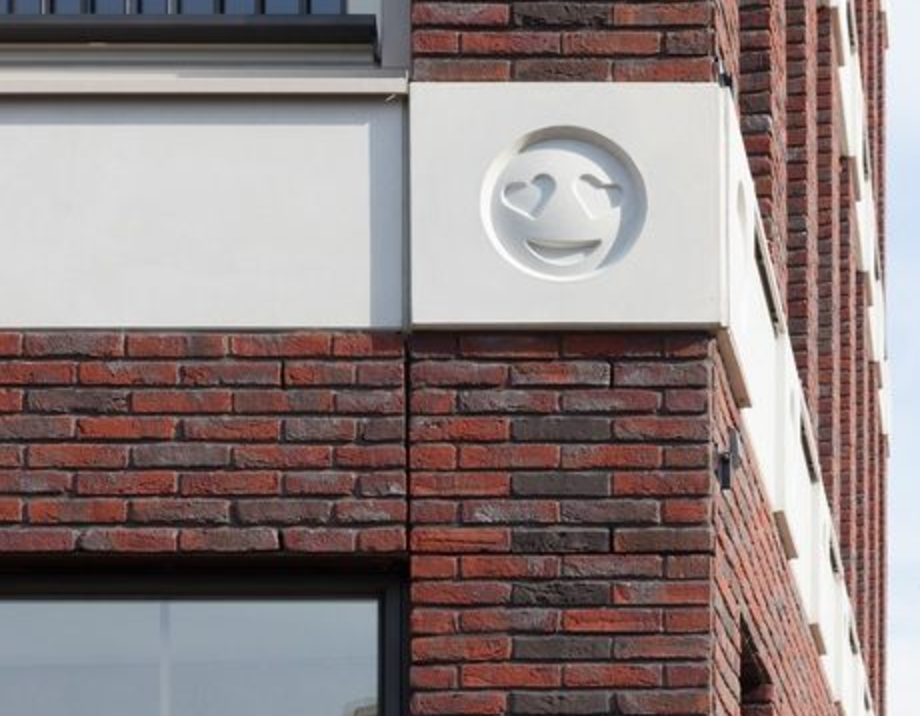 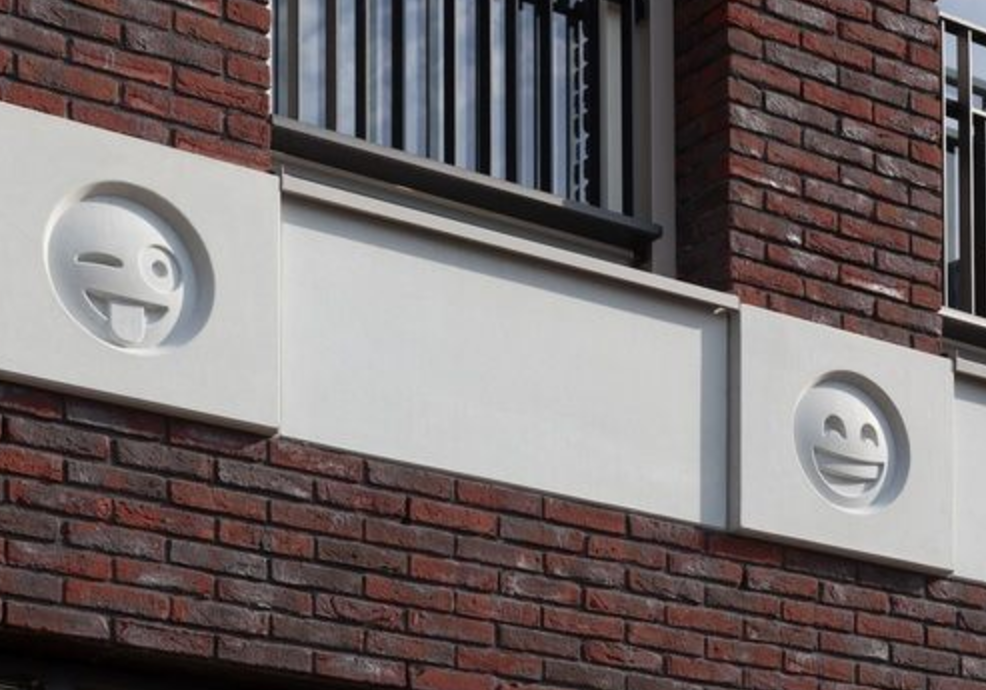 Believe it or not (and trust me, you’re allowed a hefty amount of disbelief on this one) these faces can be found on theÂ Plein Rond de Eik building in Amersfoort, Netherlands.

‘Changiz Tehrani, of Attika Architekten, was inspired by classic architectural ornamentation, as well as a nearby building called â€œThe House With the Heads,â€ which features busts of six Greek gods on its own facade. The use of emojiâ€”in this case the WhatsApp designs of Willem Van Lanckerâ€”in the building is an acknowledgement of the fact that the yellow smiley faces have become the fastest-growing â€œlanguageâ€ in the world.’

One can only hope.

The photos and the quote/storyÂ comeÂ via Atlas Obscura. Go read.

I got bored a couple of Saturdays agoÂ and decided to make something. 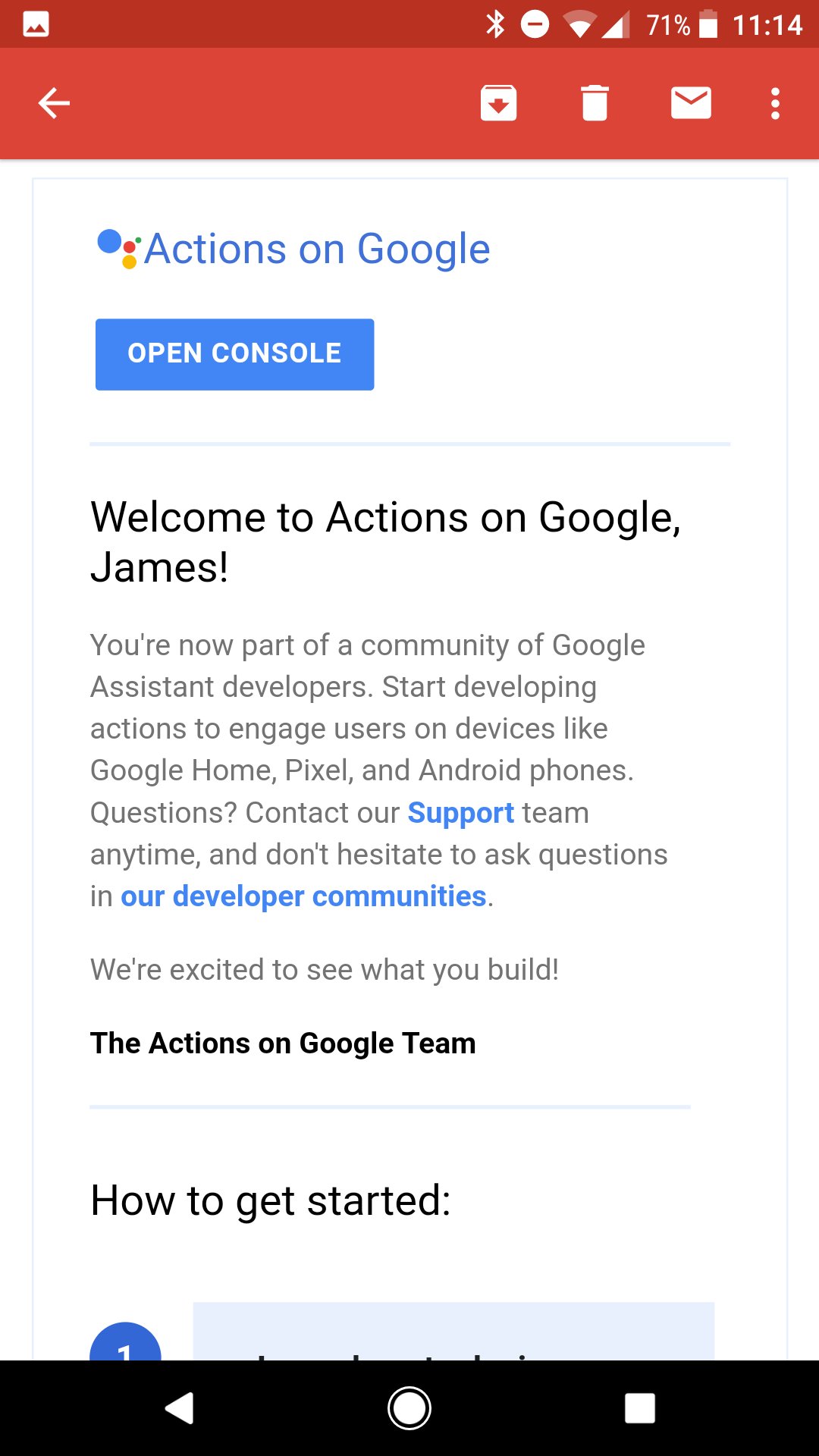 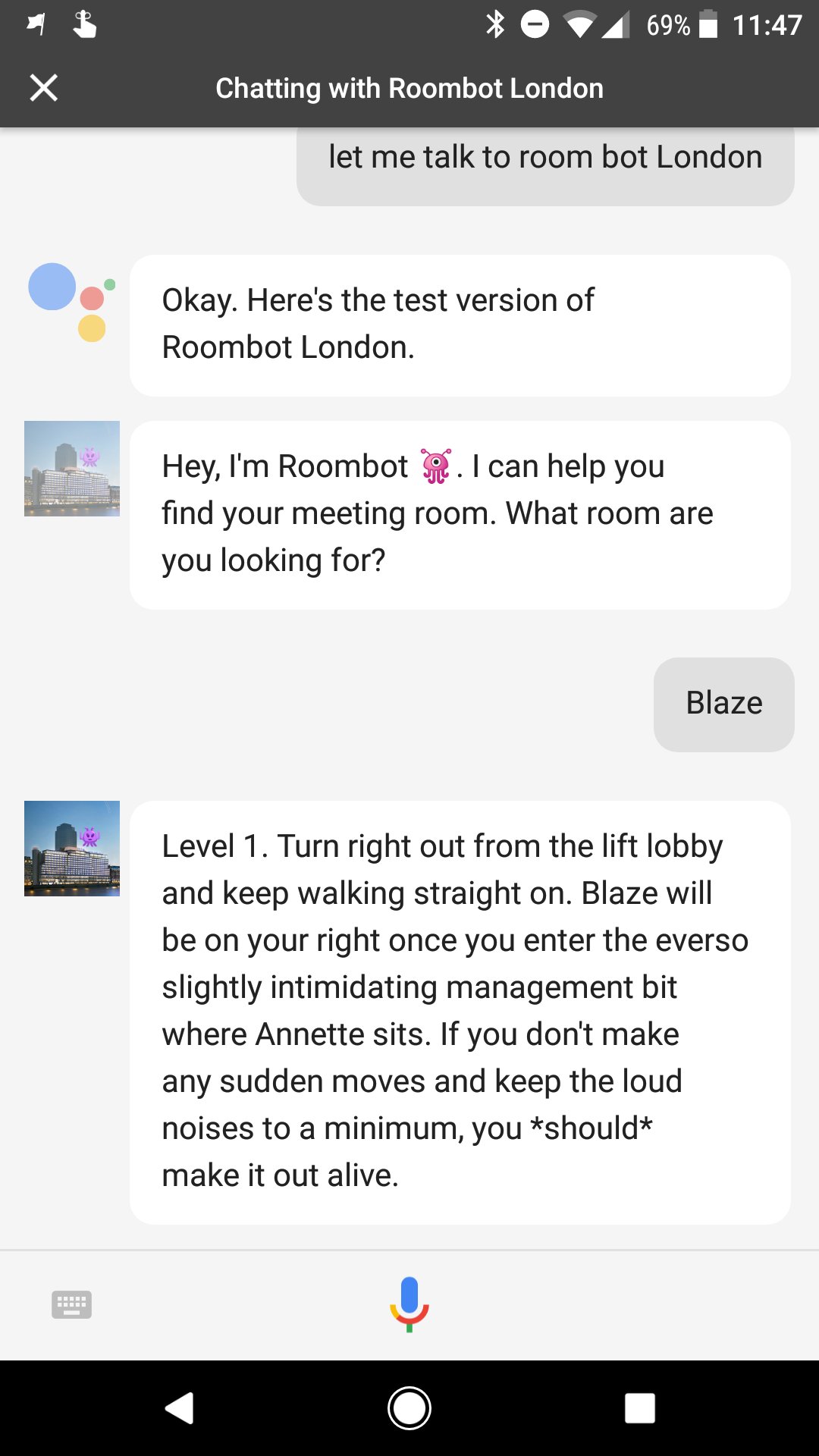 (no? ok, well here’sÂ the primer, here’sÂ some chat about it, and here’sÂ the bot itself).

Well, what you’re looking at above is the first take at it being incorporated into Google Assistant usingÂ Actions on Google.

A few things to note on this:

But yeah, if you want to go mess about with Google Assistant Actions, you can do really quickly and easily withÂ their developer console. Oh, you’re going to needÂ an api.ai accountÂ too (but that’s easy) – they’ve also got a few pre-made ActionsÂ you can mess about with too.

And I’ll yell again when/if this ever makes it live.

Bonus thing for those Google Assistant users reading this based in the UK – you had a whole bunch of new featuresÂ roll out this week. Check to see if you have them yet.

4. TURN OFF YOUR PUSH NOTIFICATIONS

“Kill your notifications. Yes, really. Turn them all off. (You can leave on phone calls and textÂ messages,Â if you must, but nothing else.) You’ll discover that you don’t miss the stream of cards filling yourÂ lockscreen,Â because they never existed for your benefit. They’re for brands and developers, methods by which thirsty growth hackers can grab your attention anytime they want. Allowing an app to sendÂ youÂ push notifications is like allowing a store clerk to grab you by the ear and drag you into their store. You’re letting someone insert a commercial into your life anytime they want. Time to turn it off.”

This is just one of many super-powerful paragraphs from a WIRED article going under the above name.

Having spent the last few monthsÂ without the main social apps on my phoneÂ I can tell you that YOU DON’T MISS ANYTHING AND YOUR LIFE WILL CARRY ON AS USUAL.

So yeah, do that.

There should be a bonus item related to this at the bottom of the newsletter too, btw.

A few editions ago, I (actually, my mate Matt) shared this awesome Medium post from Dave Parkinson, ‘50 ways to lose weight‘.

It is a great and easy read.

Earlier this week I was reminded of another decent – but more data-led – piece on a similar matter, this time byÂ Mat Morrison. 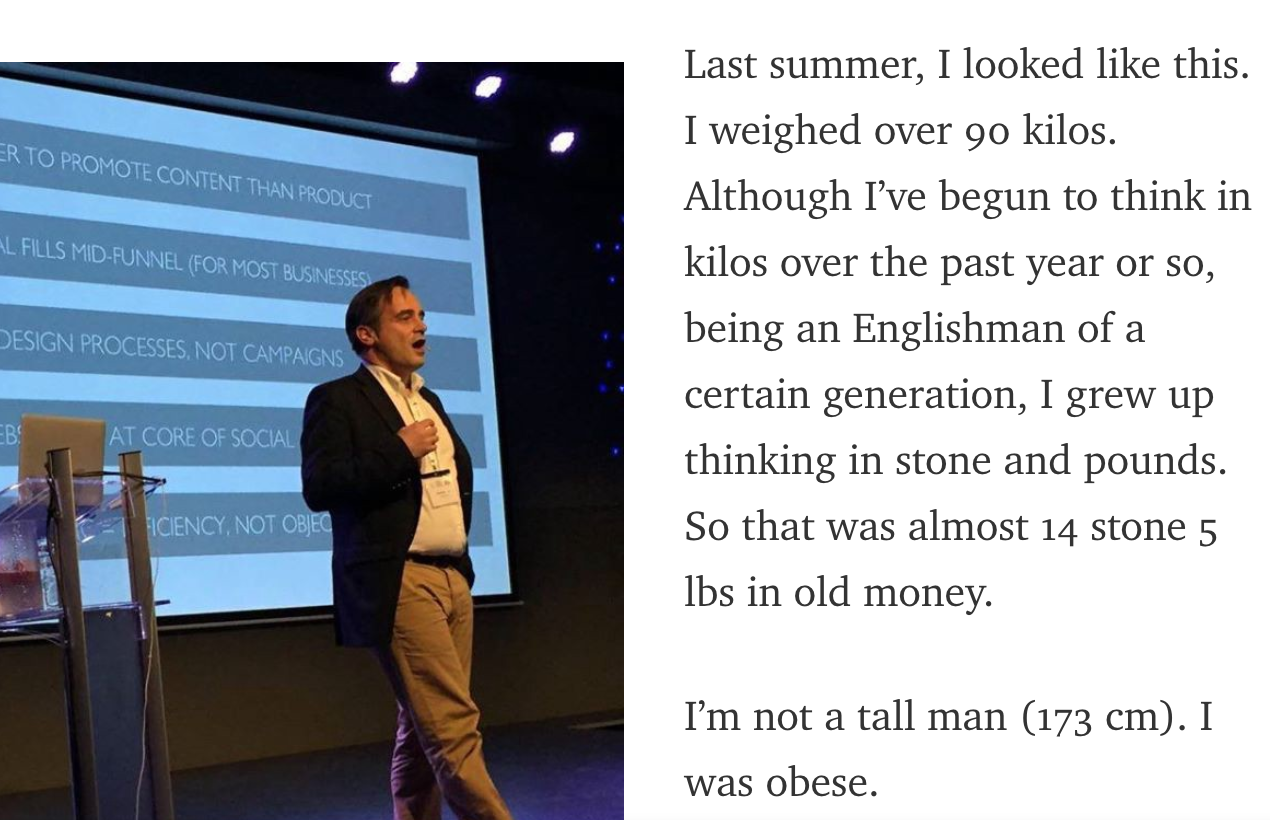 I know Mat fairly well and being reminded of how he looked back then (three years or so ago now) is weird in a way. As clichÃ© as it sounds, it really is like looking at a different person.

OK, so the point is: if you’re looking to change your body shape, Mat did itÂ with determination + data.

BONUSES THIS WEEK ARE A HOTCH POTCH OF RANDOM STUFF I’VEÂ WRITTEN, FAVOURITED ON TWITTER, OR SIMPLY JUST STOLEN FROM OTHER NEWSLETTERS.

FOR SOME OF YOU, I KNOW THIS IS YOUR FAVOURITE SECTION. I HOPE THIS WEEK’S DOESN’T DISAPPOINT.

And I’m done. See you in September x