Cleaning out my RSS, ten feeds at a time –

Anssi MÃ¤kelÃ¤
Ex-client, but still a mate. Anssi hasn’t blogged in so long that his URL is now up for sale. We’re friends on Facebook, so what the hell?
Decision: Remove

atmaspheric | endeavor
Jonathan Greene is a) a great guy b) a smart chap and c) head of super smart stuff at R/GA NY. All of these things (especially ‘a’), make this one an easy choice.
Decision: Keep

AustinTranslation
A relative newcomer to the RSS reader, Austin Madison is an animator at Pixar and his blog is a BLAST. Case in point, this recent post about a Batman-related sketch game he played with a friend.

The output is awesome – 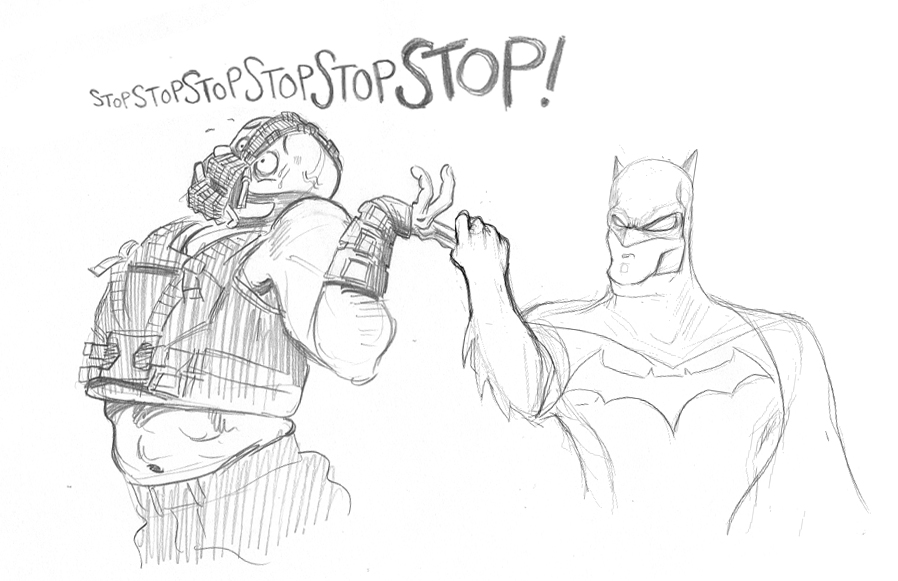 Babbling VC
I can’t remember how or why I came across Paul Jozefak, I think he was of SpinVox’s first German users and we got chatting over Twitter one day. Anyway, as the title suggests, Paul is a venture capitalist based in Hamburg and his blog is a great insight into the world of funding start ups. I like it, and I like him.
Decision: Keep

Bastian Lehmann
I used to work with Basti at Refresh Mobile, about six years ago(!!!), and we’ve always had a decent admiration for each other’s hair-brained approach to creativity and ideas… These days he’s working his backside off over in San Francisco, as founder and CEO of awesome quick delivery service, Postmates. Basti’s never been a big blogger, so it’s no surprise that his site is no longer active. Ah well, I’ll just stalk him on Twitter instead.
Decision: Remove

BBH Labs
This is one of those blogs that doesn’t publish often but, when it does, it pushes and challenges my own thinking virtually every single time. I can’t recommend it enough. Basically, if you’re not reading this, then you’re an idiot. The end.
Decision: Keep

Be Inspired
The blog of Mediavest’s EVP, Steven Wolfe Pereira, I literally have no idea whether to keep it or not. He’s nuts. Like proper mad as a box of frogs nuts. Mediaczar put me onto him yonks ago; some of his stuff I read, some of his stuff I skip over and never look back. Actually, theÂ really good stuff is actually bloody great. So…
Decision: KeepÂ

Ben Ayers
I’ve known Ben through ‘the industry’ for fair few years now, first when he was doing social at ITV and now, as head of social media at Carat. He’s a good chap, but for some reason his blog no longer works. Rubbish. Sort it out Ben!
Decision: RemoveÂ

Ben’s Posterous Blog
The posterous blog of one Ben Smith. Mobile-blogger (currently one third of the 361 Degrees Podcast), smart chap and long-time friend of mine, Ben’s blog is one of those things that I subscribe to and then kind of forget about [he doesn’t post that often – not here at least] but then get pleasantly surprised again when new content appears. Case in point, this rather blog post about London 2012. Check it.
Decision: KeepÂ