Arresting, harsh and, atÂ times, harrowing. ILL MANORS is no easy watch.
But oh my God, is it worthÂ it.

The directorial debut of Ben Drew – aka Plan B – and featuring a cast of relative unknowns (many of whom were from the streets where ill Manors is set), this is a film with a message: your surroundings define who you are – but there is always a choice.

Stark, intimidating and dirty against such hopeful (yet faded) iconic landmarks of the future; first, the former Millenium Dome, once a sign of development and symbolic of the hopes of East London, left dying by the government (until the o2 conversion). Then second, the stadia of the forthcoming Olympics; again a herald of hope. Again, an uncertainty around what happens afterwards – the symbolism here will not be lost on many. London has never been more real, or more frightening.

Drew, who not only *wrote and produced*, also provides the soundtrack to our journey into the East End of London; narrating the back story of each and every lost soul we meet along the way. And what a journey it is.

The stories told throughout Manors are multiple; twisting and turning, entwined and continual. They swing in and out of their own timelines as each new character enters our view and, slowly but surely, we find out their past – with our poetic narrator in tow – before the car crash of the present day slams back into vision. Messing with perspective, showing the same scene from multiple, time-varying points of view, Manors is smart and surprising. There’s darkness in (nearly) everyone and, as the madness grows, and the tension-wrought second act comes to a close, you wonder where Manors will take its residents next.

Think GO. Think Eyes Wide Shut. Think Pulp Fiction. Think Requiem for a Dream. Think Ben Drew. This is a man of a generation: telling the story of a lost generation. And he tells it incredibly, frighteningly well. Both in displaying the raw underbelly of what lies East of our capital city as well as in the deftness of his craft.

This is his debut. His first time.

I was lucky enough to catch Ben speak, so eloquently, at the Tedx Observer a while back. He was engaging and open about the causes of London’s riots last summer and, watching Ill Manors, you begin to see what he was getting at. Run down city streets, limited resources to inspire the youth of today and gang culture everywhere – the message here is clear: our kids need saving.

Manors is not without its faults, admittedly, but most can be shrugged off as the mistakes of the yet-to-be-honed technical skills of a film-making newbie. In a summer of mental movie blockbusters, Ill Manors is like a cold bucket of water over the head. Refreshing, cold, awakening. 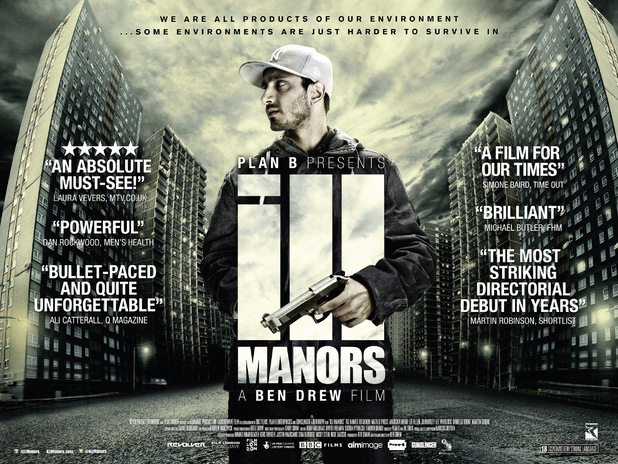 One thought on “Review: ill Manors”