The trailer is here –

And, even though Mr Ridley Scott would have you believe otherwise, the connections to the Alien franchise are strong with this one.

This ship, the ship the crew of the Nostromo board at the beginning of Alien in response to the distress / warning call. Which, surprisingly enough, looks remarkably like this one, exploding and falling out of the sky in the trailer for Prometheus.

OK, so some spaceships look like other spaceships. True. However, any fan of the original Alien film will recognise the following image, aka – Exhibit B: 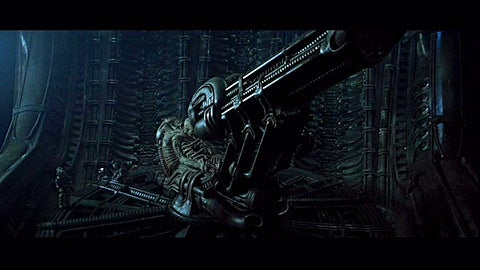 This chap is actually nameless in the film, however he has somehow earned the name of ‘The Space Jockey‘. Look what he’s sitting on and just look what this is, coming out of the ground in the Prometheus trailer. This film is set on the ship that the crew of the Nostromo discover. That much is plain to see. Ridley Scott has said that there will be no Aliens, however there will be space jockeys. In Greek mythology, Prometheus stole fire from the gods and gifted it to man. The film’s official synopsis talks about man’s search for its very beginnings.

One wonders if these ‘space jockeys’ are pitched as our creators [as well as those of the Xenopmorph] and this is what happens when we meet ‘God’ face to face.

Who knows, we only have to wait until summer 2012 to find out and it’s about time Ridley Scott came back to the sci-fi genre.